Latest Update On The Qipco 2000 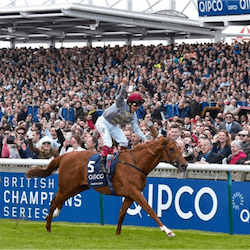 The Qipco 2000 Guineas Set to Thrill

The 2017 Qipco 2000 Guineas will be the smallest race since 1995 with just 12 horses in the running after Monday’s confirmation announcement. Four of the horses competing for the Newmarket Classic will represent trainer Aiden O’Brien. He will be saddling ante-post favourite Churchill along with Peace Envoy, Lancaster Bomber and Spirit of Valor.

O’Brien will be looking for his eighth win in the classic. If Churchill does take the honours, Aiden O’Brien will become the most successful trainer in the history of the race.  Speaking to the press, Churchill’s handler said that the colt is in fine form at the moment and everything is as good as can be expected at this stage. O’Brien was last successful at the 2000 Guineas in 2015 when Gleneagles charged down the straight to claim victory.

This weekend, he has an additional three horses running with Churchill but no Caravaggio in the mix. Meanwhile, French trainer Andre Fabre is feeling confident about his chances with Al Wukair. Fabre was last successful at the 2000 Guineas back in 1995 with Pennenkamp and has high hopes for the three-year-old who carries the colours of Al Shaqab Racing. Speaking to the press, Fabre said that he is feeling confident that Al Wukair will be in the first three on Saturday. That being said, he does feel a bit concerned that he was not a group 1 winner as a two-year-old. This is an achievement most Guineas winners have completed including Pennenkamp and Zafonic.

According to Fabre, the ground is not an issue for Al Wukair. He has won on soft ground before and he seems will balanced.  Fabre says he has never had any complaints about Newmarket, citing it as one of the best in the word. For trainer Richard Hannon, recent Greenham Winner Barney Roy is one of three possibilities this weekend. He will be running alongside Dream Castle who came in second in Greenham as well as galloper Top Score. Trainer Aiden Obrien will also supply the favourite for the 1000 Guineas with Rhododendron leading the field.

Final Field for the Qipco 2000 Guineas