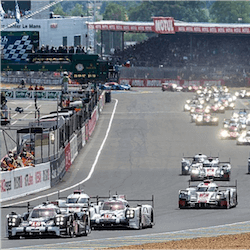 With the 85th iteration of the gruelling Le Mans 24 hours around the corner, only two more driver seats are left open. Last week the European Le Mans meeting announced the majority of the drivers scheduled for the event. Proton and G Drive Racing have yet to confirm their third drivers.

Christian Reid who is the team owner and a driver for Proton has told press that he will be joined by Stephane Lemeret and Nick Yelloly in their Porsche 911 RSR, with a third driver yet to be confirmed.

The position was originally to be filled by Wolf Henzler who works for the Porsche factory as a driver but he pulled out due to unspecified reasons.

The Second team will feature Le Mans veteran Patrick Long who will be competing in his 14th Le Mans event. He is joined by Mike Hedlund and Abdul-Aziz Al Faisal. Proton also has a third car that will be driven by Matteo Cairoli, Marvin Dienst and his brother Reid Dienst.

Russian Team Filled To Capacity
Russian team SMP has also announced their line-up of drivers. Mikhail Aleshin, Viktor Shaytar and Renault Formula 1 reserve Sergei Sirotkin will be representing the team in both the LMP2 and ELMS events.

G Drive Racing has announced Memo Rojas and Ryo Hirakawa as their drivers with the third seat still to be filled.

The 5 hybrid vehicles will be part of the 60 car squad taking part in the event. This is a great sign for the industry in a time when climate change and emission concerns are on many people’s minds.