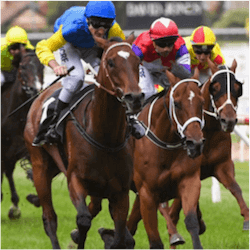 Memsie Stakes A Priority For Lees

Le Romain’s trainer, Kris Lees, has confirmed that his successful galloper will be heading to the Memsie Stakes this year. They have been training on their home track in Newcastle, a 1000m track and in his preliminary trials there, Le Romain has been performing well.

Lees has said that the horse is not where they want him to be with regards to his fitness just yet, but they still have a few weeks before the Memsie is due. Along with the established Le Romain, Lees is also training the up and coming Invincible Gem.

She was a runner up at the Randwick Guineas this year and she will be starting her group 1 campaign this year. Lees has high hopes for her. Comparing her to Le Romain he stated that she is much more forward than Le Romain and it seems that she is hungry for competition.

Lees also took racing veteran Artless under his wing. The sprinter performed convincingly in a 1000m trial and Les is determined to train the horse back into fighting shape for a spring program.

Heading to the 1400m Memsie is the short term target for Lees but the trainer is said to be preparing Le Romain for the Everest in a few months time but so far this is only conjecture.

Lees is said to have only confirmed that they will consider an invitation to the $ 10 million dollar race. Before that though he is set to also appear at the Makybe Diva Stakes after the Memsie.

Le Romain has been working hard to return to the racing fold after taking a short break. First up for the two is the Randwick Missile Stakes. This $200 000 G2 race will set the tone for the Memsie a few weeks later.

Lees will be adapting the preparations for Le Romain based on that result. The Memsie had its prize money doubled from $500 000 to $1 000 000 adding additional incentive for competitors to show their all.

Le Romain’s record has him as a strong contender for a great performance in the race. He is a triple Group 1 winner   and the defending Cantana Stakes champ, with wins at the Randwick Guineas and the Canterbury Stakes.

With such an ambitious Spring schedule, there are certainly high hopes for Le Romain. His consistent performances certainly bolster his odds for a string showing, but there is still a long way for both trainer and horse to go to be at the level of last year’s Memsie winner, Black Bart.