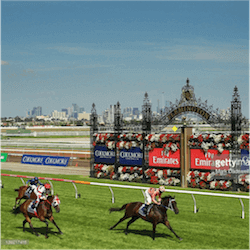 The field for the 1000m Group 1 weight-for-age Lightning Stakes at Melbourne’s Flemington Racecourse has been finalised, and New Zealand fans of Australian racing have some attractive online betting options among the 13 horses in the draw.

Favourite at A$4.40 is Flying Artie, the 3-year-old colt trained by Mick Price. He’s managed three wins from six starts, also finishing second in two and third in one. All six have been sprints, with his most recent outings in October 2016 delivering two victories over 1200m at Caulfield and Flemington.

However, 7-year-old gelding Flamberge, the 2016 Oakleigh Plate winner, is also in the running and on the comeback trail after his slump later last year. Under the Lightning Stakes’ weight-for-age rules, he will be carrying four kilograms less than he was in his last outing: January’s Kensington Stakes at Flemington, in which he ran fourth. He could well do better carrying 58.5kg over the same distance, despite being offered at long odds of A$31.00.

According to current rankings, Flamberge at 112 is the top-rated sprinter among the Lightning Stakes nominees, followed by Flying Artie at 110. That’s a ranking shared with The Quarterback, the 6-year-old gelding currently at A$16.00 for Saturday’s race, and winner of the 2016 Newmarket Handicap.

The second favourite, at A$4.80, is 3-year-old colt Star Turn, with two wins, one second and one third from four starts this season. Third favourite is 4-year-old entire Spieth, with five wins and two seconds out of nine career starts, at A$5.00.

However, there’s plenty of competition at the top of the betting. Apart from Flying Artie, Star Turn and Spieth, three other runners are currently priced at under A$10.00. They are 5-year-old entire Supido, winner of the 2016 Women Trainers Handicap over 1000m at Flemington, at A$8.00, and two A$8.50 options: 4-year-old mare Heatherly, and 7-year-old gelding Terravista.

Flamberge and The Quarterback look good for those determined to back an outsider, as do 5-year-old Illustrious Lad and 4-year-old Faatinah, both geldings.