Lightning Stakes is Ready To Strike 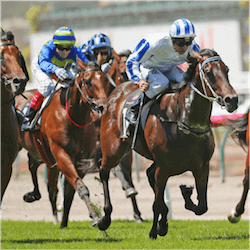 With the Black Caviar Lightning Stakes fast approaching, many much anticipated racers have confirmed their attendance. One of which is Illustrious Lad with his trainer Peter Gelagotis.

Illustrious Lad has had a very strong performance so far, never finishing worse than 2nd in 4 black type starts during the Spring Carnival. One of his best wins so far was a fantastic almost 2 length victory at the Salinger Stakes.

Many eyes are on the duo of trainer and stallion as there may very well be a very bright future for Illustrious Lad if he manages to keep up his form.

His trainer is very excited to unleash him at the Lightning Stakes after he has had a rest period and he feels his form is very impressive.

The horse is currently trailing as a preparation for the Stakes, but Peter is eyeing to place Illustrious Lad in the Group1 event for the Newmarket Handicap. This however will depend on the performance at the Lightning Stakes.

Meanwhile a new jockey has been announced to take the reins of Spieth at the Lightning Stakes, none other than Hugh Bowman.

Their first race together will take place at this year’s Stakes. Spieth’s trainer, Bruce Heys, has stated that he is very proud to be working with Bowman. He was very impressed with his performance in the Spring Carnival, especially after his second place in the Darley Classic on Fell Swoop.

Not showing at the Lightning Stakes this year will be the celebrated Chautauqua. It is a great loss for many fans that the current reigning champion will not be there to defend his title.

Unfortunately the racer already has commitments for the Rubiton Stakes that starts shortly before the Lightning Stakes is scheduled.

Managing owner, Rupert Leigh is planning to take Chautauqua to the Newmarket Handicap after the Rubiton depending on the handicap picked up.

From here they will be entering the TJ Smith stakes for the third year in a row.

They also wish to fit in two more events before June. Firstly they want to return to Hong Kong where Chautauqua will be defending his Chairman’s Sprint title and from there a tilt at Royal Ascot.

Fans are now sitting back and waiting patiently until the 15th of February. This is when the Lightning Stakes barrier and field draw is set to be completed and announced by noon.