Look Back at the New Zealand Derby 2016 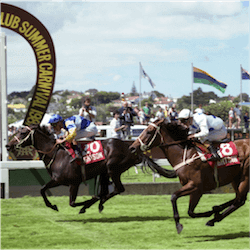 A Look Back at the 2016 New Zealand Derby

With the 2017 New Zealand Derby just past, now’s the perfect time to take a look back at last ears race and find out a bit more about it.

The New Zealand Derby is a flat horse race that is contended by the best thoroughbreds from New Zealand, many of which have raced all over the world. The race is an amalgamation of the Great Northern Derby and the New Zealand Derby and marks the start of the Auckland Cup Week. It is a set weights for age race for three year old thoroughbreds and is run over 2400 meters or 12 furlongs. The race was originally run on Boxing Day, but was moved to the first Saturday in March in 2006.

The 2016 Derby was won by the gelding Rangipo who is trained by supreme New Zealand trainer Tony Pike. He was ridden to victory by jockey Vinnie Colgan in Colgan’s sixth New Zealand Derby win. Rangipo and his stable mate Raghu were split by the Stephen McKee and Eddie Chippendale trained What’s The Story by a short head and neck respectively. This resulted in an incredibly exciting race as the three thoroughbreds fought for dominance right up to the line.

So far Rangipo has won the Avondale Guineas, Waikato Guineas, and Great Northern Guinea. He took a good spot early in the race being one off the barrier in fifth place. He then edged to the left to challenge his stable mate, just pulling into the lead in front of Raghu and Whats The Story.

Rangipo is by the super fast stallion Stryker. He was foaled in 2012, making him four years old when he won the 2016 new Zeland Derby. Rangipo’s dam is the well-bred Holloway, who is a half-sister to stakes winners Maze, Barlinnie and Penitentiary. His two-year-old season was unremarkable, with an eighth and a fifth over 1000 meters and 1200 meters respectively.

His three-year-old season was much better, beginning with two wins and a fourth before he was rested for four weeks. The rest of his season as a colt saw three more firsts before he was moved over to trainer Tony Pike and gelded. From there he won the New Zealand Derby and the Avondale Guineas. He was entered in a number of Australian races but has yet to show form on the mainland.

Rangipo’s Sire, Stryker, is a bay stallion by Fastnet Rock. He is a winner racehorse in his own right, running until he was four years old for three seasons. Stryker stands at stud in Australia and has produced a number of offspring including Rangipo.

Rangipo counts as a top-level performer, although not yet an elite horse. He has competed in three Group One races and has won one of them. His future continues to look bright, as he has shown promise as a sprinter over short distances. It remains to be seen however where he will run after his current rest, although it will most likely be in New Zealand where he has proven himself a winner on a number of occasions.

Saturdays $NZ1 million Group I New Zealand Derby was surely a highlight of the racing calendar, and as in 2016, there sure to be a great number of happy punters who backed a winner.