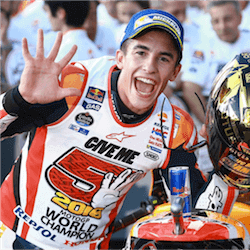 Marc Marquez has won his fourth MotoGP title with a third-place finish at the Valencia season finale. Valencia was the last chance for Italian Andrea Dovizioso to make a play for the title. However, it meant that Dovizioso would have had to win the race and hope that polesitter, Marquez finished outside the top 11.

Marquez led for a brief period at the start of the race before Johann Zarco overtook him on the fourth lap. The Frenchman led a group of four tight riders, which included himself, then Marquez, Pedrosa, and Lorenzo. Dovizioso was lying in fifth, putting pressure on his teammate give him a chance to jump the order. Lorenzo however, refused to move over and was eventually shown a pitboard with codded team instructions.

It wasn’t until lap 20 that the front order finally changed. Marquez saw an opportunity to pass Zarco but was overtaken on the next lap. Back on the attack, Marquez misjudged his breaking on turn 1 and almost blew the title. He managed to keep his Honda upright re-joined the race in fifth behind Dovizioso.

Dovizioso Crashes out for Ducati

Ducati’s hopes of a MotoGP title were dashed soon after as Lorenzo crashed followed by Dovizioso on turn 8 with just six laps remaining. With the two Ducati’s down, Marqez was promoted to third position, which was more than enough to beat Dovizioso to the title with a 36-point lead. At the front of the pack, Zarco was under pressure from Pedrosa and eventually succumbed to the Honda who took the lead on the final lap. Pedrosa clung to the lead to take his second MotoGP victory of the season while Marquez finished 10 seconds behind the frontrunners.

Behind Marquez, Alex Rins, finished 2.7 second later, to take a career-best for Suzuki while Valentino Rossi had to settle for fifth. Rossi’s lower placing meant that he was beaten to fourth place in the overall standings by Pedrosa by just two points. Meanwhile Andrea Iannone dropped from third to finish sixth in the race behind the Honda duo of Jack Miller and Cal Crutchlow. Completing the top ten was Ducati’s Michele Pirro and Tito Rabat. Another title contender, Maverick Vinales had a terrible final race, finishing in 12 head of Bradley Smith on the KTM.

There were a number of riders who crashed out of the race including Ducati’s Alvaro and Scott Redding. They were followed by Aleix Espargaro for Aprilia and Mika Kallio, the KTM Wildcard.