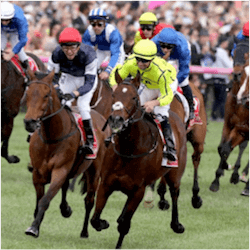 Kiwi punters will have all eyes on Flemington for the world-famous $6.2-million Melbourne Cup over 3200m, and there are plenty of contenders in the 23-horse field. Favourite in Melbourne’s most-iconic Group 1 handicap is five-year-old British horse Marmelo, at $8.50. German gelding Almandin has dropped to $9.00, with Humidor at $9.50.

Single Gaze, Hartnell, Cismontane and Amelie’s Star look like the best Cup bets among the outsiders. However, Tuesday’s racing is only the first of three meetings at Flemington this week that will provide punters with top-quality Spring Racing Carnival thrills.

Cup day also includes two for the ladies: the 1400m Gr. 3 Maybe Mahal Stakes for fillies and mares, won last year by Artistry, and the Ottawa Stakes, a 1000m Gr. 3 sprint for two-year-old fillies, won by Invincible Star in 2016. Both races are run at set weights and penalties.

The dust from the Melbourne Cup will barely have time to settle before another prestigious Gr. 1 race has punters back at online sports betting sites. On Thursday, Flemington hosts the million-dollar VRC Oaks over 2500m, restricted to three-year-old fillies.

Final acceptances weren’t available at the time of writing, but Aloisia, Pinot and Luvaluva were being offered at below $10.00 in ante-post betting. Other races on Thursday’s card include the 1400m Chatham Stakes, a Gr. 3 open handicap, and the 1000m Gr. 3 Red Roses Stakes for three-year-old fillies.

Emirates Stakes for $2-million on Saturday

Cup week ends at Flemington on Saturday with Emirates Stakes Day. The name race has prize money totalling $2-million, and it’s often the next start for horses that did well in the WS Cox Plate at Moonee Valley two weeks earlier. It’s a 2000m Gr. 1 weight-for-age gallop, and 2017 WS Cox winner Winx is the firm ante post favourite.

Another Emirates Stakes Day race that should be worth a punt is the million-dollar weight-for-age Gr. 1 VRC Sprint Classic over 1200m, known as the Darley Classic these days. There’s also the 2000m Gr. 2 Matriarch Stakes for mares, the 2600m Gr. 3 VRC Queen Elizabeth Stakes quality handicap, and the 1000m Gr. 3 Maribyrnong Plate for two-year-olds.