The Missile Stakes at Randwick 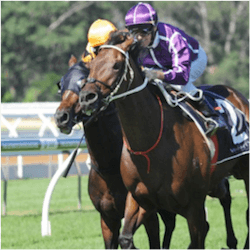 There’s plenty of online betting action available across the Tasman for New Zealand horseracing fans right now, as the Sydney Spring Carnival gets underway. This Saturday at Randwick, the 1200m Group 2 Missile Stakes will be the focus of much attention, as the first black type race of the 2017-18 season.

The Missile, which sees its purse boosted to AU$175,000 this year, is a weight-for-age event for three-year-olds and older. It is traditionally a proving ground where established sprinters returning from a spell face off against the top gallopers of the winter season.

One of the four horses in Saturday’s nine-horse field returning from a spell is the race favourite, Le Romain. The 5-year-old gelding trained by Kris Lees hasn’t raced since the Group 1 Schweppes All Aged Stakes at Randwick in April, in which he finished second. He’s on a career record of 18: 6-8-1, with three firsts and four seconds in the 2016-17 season alone.

However, he’s drawn at Barrier 8 for the Missile, and he’s one of six horses carrying the race’s heaviest weight: 58.5kg. The bookies reckon he has a win in him, however, and he’s offered at $2.20.

Le Romain’s stablemate, 4-year-old filly Invincible Gem, is on a career record of 9: 4-3-0, with all four of her wins coming last season. She hasn’t raced since placing second in the Group 1 Randwick Guineas in March, and she’s drawn at Barrier 6 and carrying only 56.5kg on Saturday. She could give New Zealand punters a nice surprise at $9.50.

The 2016 Missile Stakes was won by Tycoon Tara, trained by Peter and Paul Snowden. The 7-year-old mare is a sprint veteran, with a career record of 32: 10-3-2, Her last race was a win at the Group 1 Tattersall’s Tiara at Doomben over 1350m in June.

She’s also carrying 56.5kg at Randwick on Saturday, but has a plum draw at Barrier 1. She’s at $4.80 to become only the fifth horse in the race’s history to win the Missile twice, and the first since Rain Affair in 2013. Jungle Edge and The Monstar, drawn at Barriers 4 and 5 respectively, are also worth a look at $5.50 and $9.00.