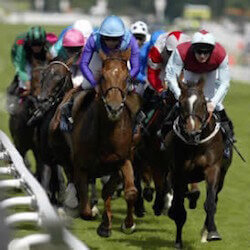 Brendan McCarthy will be bringing his rising star, Murt the Flirt to the Sir John Monash Stakes, for his toughest challenge yet. McCarthy is a seasoned veteran in racing but his last win at the Monash Stakes was with Regal Shot more than 15 years ago. Murt seems to have caught everyone’s attention and hopes are high in the McCarthy camp that he could be the horse to give the team another Stakes victory.

Another feather in Murt’s cap for the upcoming race is the fact that he will be accompanied by Chris Symons, the riders that was with him in three of his four wins. He has been with Murt so far in 12 of his 21 races and both horse and rider seem to be amped for the Stakes. Punters who are excited about what the event may hold can get in on the action at Sportsbet if they want to wager online.

Looking For A Wet Track

According to McCarthy Murt the Flirt did pick up a virus when he was first stabled but he has made a full recovery and he has been performing great in practices. The team is hoping for a moderately wet track as Murt performs better in these conditions as opposed to a perfectly dry and hard track.

McCarthy is ideally hoping for a track with 4 or 5 rating. 3 and better will not serve Murt well. Murt is up against some very stiff competition. The nominations for this Saturday’s event have been announced already and the line-up includes heavy hitters like Flamberge and Lord of the Sky.

Lord of the Sky will be making a notable return to the Stakes after it was out of racing since August last year. Robbie Laing, Lord’s trainer will be using the Stakes as preparation for Lord’s defence at the Blenchingly Stakes.  In previous Stakes events Lord of The Sky finished first in 2014, seventh in 2015 and fourth in 2016.

With a selection of veterans and fresh faces, this Sir John Monash Stakes will be very fiercely contested.

The other nominations for the Stakes include: