A New Favourite For The 2017 All Aged Stakes 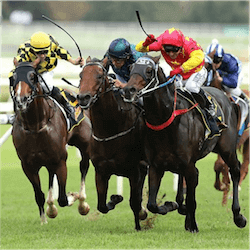 Le Romain a New Favourite for All Aged Stakes

Darren Weir, the record-breaking horseman has made the decision to pull race favourite Black Heart Bart out of the 2017 All Aged Stakes. When the early nominations closed on Monday, Black Heart Bart was sitting at the top of the list with odds of $4.20. With the track just too wet, Weir has decided to focus his efforts on defending the Goodwood title.

Black Heart Bart was last seen competing in the Caulfield’s CF Orr and the Futurity Stakes Group 1 Double. Going into the All Aged Stakes, the six-year-old was the firm favourite among 18 hopefuls. It was early Tuesday morning when Weir confirmed that the champion galloper would not be racing on the weekend due to the inclement weather and soft track. Instead, Black Heart Bart will be Weir’s shot at a Group 1 back-to-back wins at the Goodwood 1200-meter race in Adelaide.

In 2015, Black Heart Bart ran a disappointing fourth at the Goodwood after being named race favourite. He then redeemed himself with a win at the Adelaide Autumn Racing carnival in the sprint classic. This year, the prize money for the Goodwood has doubled to $2 million and the race moved to Morphettville Racecourse on the 20th of May. In 2016, Black Heart Bart’s lead up run to the Goodwood was the All Aged Stakes, which saw the horse finishing in second to English.

Despite not having a good lead-up race, Black Heart Bart comes in as an early favourite for the Goodwood race with impressive odds of $3.20. Meanwhile, trainer Darren Weir will still have decent representation in the All Aged Stakes field. Weir nominated a further four horses from his stables including the William Reid Stakes runner up Hellbent who is sitting at odds of $11. Stablemate Voodoo lad comes as third placed favourite for the All Aged Stakes with odds of $6.50.

Reigning All Aged Stakes winner, English had an impressive run in the TJ Smith Stakes with a second placing. English comes in as a second favourite at odds of $4.60 but has to pass a vet check on Thursday after being treated for a minor laceration to her leg.

If you want to bet on this and other races this weekend, check out what Sportsbet has to offer in terms of promotions. Their Saturday Racing Offer: Randwick Races 1-4 promotion will give you back up to $50 back in Bonus Bets if your horse runs 2nd or 3rd.