News And Updates On The Qatar MotoGp 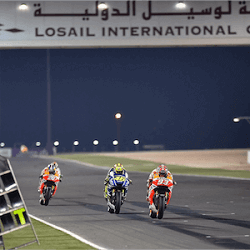 What to Expect at the Qatar MotoGP

The MotoGP season kicks off this coming week with the Qatar MotoGP at the Losail International Circuit. Taking place from the 1st to the 3rd of March, the Qatar MotoGP is not only the first races of the season, it is also possibly the most important. The race will give punters and sports enthusiasts a good idea of how the teams are set and what to expect in the coming season.

In 2017, Spanish rider, Maverick Viñales took pole position in the race and eventually ended up winning for Yamaha. Andrea Dovizioso come in second on his Ducati while fellow Italian Valentino Rossi came home in third for Honda. But how are the teams going to fare this year?

In testing so far, Honda have been impressive with Marc Marques and Dani Pedrosa clocking impressive times. The team has also received positive comments from the riders and will be wanting to get their campaign off to a good start.

The Ducati team meanwhile have set the fastest ever lap in the Seeping training circuit with Jorge Lorenzo in the saddle. In Buriram though, Lorenzo found it much tougher going. Lorenzo and his teammate Andrea Dovizioso will be wanting to into the GP18 at Qatar and other venues. Lorenzo and 2017 runner up, DesmoDovi have excellent records at Losail and will be working on the finer details for 2018 including detailed aero investigations.

Team Suzuki Ecstar also updated their aero for the 2018 and has been testing at Buriram with much enthusiasm. The tests show positive results, despite both riders crashing early on in testing. This year, the Hamamatsu factory will be wanting a top-5 finish with Alex Rins back in action after an injury prone season last year. He will be joined by Andre Iannone who is also one of the big threats come race day.

Red Bull KTM will be racing one again, and have shown great progress in the preseason. In Buriram, Bradley Smith and Mika Kallio were on the track for testing although Esparagaro should be fully recovered for the Qatar event.

Yamaha Still Have Issues to Sort Out Before Qatar

Meanwhile Suzuki are confident which package they intend to run in the season opener. At Yamaha, they still have a few issues to sort out before they have a full 25 points on the board. Yamaha showed good results in Sepang although, both Maverick Viñales and Valentino Rossi left feeling they needed time in Qatar to sort out their problems. It seems grip is still an issue along with the electronics.