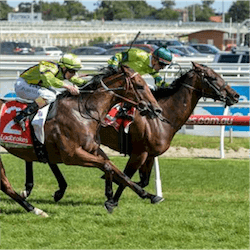 Australia’s autumn racing has lots to offer New Zealand’s online betting community; for example, February 25 sees Blue Diamond Stakes Day at Melbourne’s Caulfield Racecourse. Apart from the title race, another Group 1 sprint punters should pay attention to is the 1100m Oakleigh Plate, an open handicap with a purse of $500,000.

The Oakleigh Plate is also the middle leg of the Melbourne Autumn Carnival Sprint Series Triple Crown; preceded by the Lightning Stakes and followed by the Newmarket Handicap, both run at Flemington. With a long run out the Caulfield chute into a single turn, the Oakeigh Plate can be any horse’s race, independent of barrier draws, so the betting is always exciting.

Trainer Darren Weir has two horses nominated for the 2017 Oakleigh Plate: Thermal Current and Hellbent. Thermal Current is a 6-year-old gelding that has won two of his three starts this year: the W.J. Adams Stakes at Caulfield and the Arbroath Handicap at Flemington, both over 1000m.

Early favourite Hellbent, a 4-year-old entire, has three wins and two places from seven starts so far this season. He finished fourth in the Group 2 Schweppes Rubiton Stakes over 1100m at Caulfield last Saturday, but won the Mypunter.Com Handicap there over the same distance in September.

Faatinah, the 4-year-old gelding that finished a disappointing seventh in the W.J. Adams, could also deliver a comeback at the Oakleigh Plate. His last win, in September 2016, was in the 1200m Bobby Lewis Quality Handicap at Flemington.

Extreme Choice, a three-year-old colt  trained by Nick Price, is nominated in the Oakleigh Plate too; his first race of 2017. In 2015-16, he was entered in six sprints and won four of them. Super Bucks, a 4-year-old mare under trainer Andrew Noblet, could also do well in the Oakleigh: she has won two of her four starts this season, both over 1100m at Caulfield.