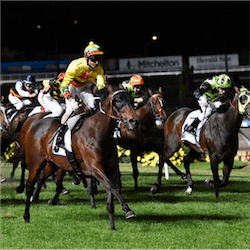 Australian horseracing generally has plenty to offer New Zealand’s online betting community, and the Group 1 sprint series in the Melbourne Autumn Carnival always draws a big following among Kiwis. The Oakleigh Plate, held every year on Blue Diamond Stakes Day at Caulfield Racecourse, forms the middle leg of the sprint series, bracketed fore and aft by the 1,000m Lightning Stakes and the 1,200m Newmarket Handicap, both run at Flemington.

The Oakleigh Plate is run over 1,100m; an open handicap with a purse of AU$500,000. It generally attracts a field of 14 or more, and the race consists of a straight sprint out the Caulfield chute, with a single turn before the final straight. This makes a horse’s barrier draw less important to the outcome, which adds to the unpredictability and intensity of the event.

This year, Blue Diamond Stakes Day is set for February 25, and the final nominations for the Oakleigh Plate will only be available on February 20. Nevertheless, some trainers and owners have already stated their intention of entering horses in the race, with others naming it among their options.

Caulfield trainer Mick Price, for example, has nominated 3-year-old colt Extreme Choice, and expects him to do well if he isn’t too heavily weighted. It has also been confirmed that Regan Bayliss, released early from his apprenticeship and now recognized as a jockey, will ride 4-year-old gelding Faatinah in the Oakleigh Plate, for Shadwell Stud and trainers David and B Hayes and T Dabernig.

Some are still hedging their bets, however. Trainer Darren Weir has confirmed that 4-year-old entire Hellbent will ‘probably’ resume, after a stint in the paddock, with the Kensington Stakes at Flemington, followed by the Oakleigh Plate.

On the other hand, Matt Dale, who trains Fell Swoop, the 2016 Plate runner-up to Flamberge, still hasn’t committed the 5-year-old gelding to any autumn races apart from the TJ Smith Stakes. All he will say is that Fell Swoop should get his next run either at the Lightning Stakes or the Oakleigh Plate.

New Zealand betting fans will want to study the final field when it is revealed on February 20, before committing themselves to any punts. We’ll keep you updated on Oakleigh Plate news as it happens.