Payne to Return As Jockey-Trainer 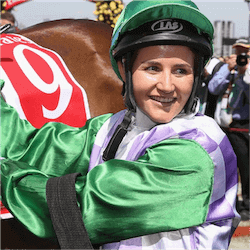 She already made history in 2015 by becoming the first female jockey to the prestigious event. For 2017 she is hoping to be the first person to be both the jockey and trainer and win the Melbourne Cup.

And to friends and family, she is fully capable of the phenomenal feat. Payne has been horseracing since the age of 18. She is the 8th child of Paddy Payne, her father, to enter into horse racing.

Her promising career was almost cut short in 2004 when a big fall resulted in her receiving a fractured skull along with bruising on her brain.

Fortunately she made a full recovery and went on to take part in the Toorak Handicap, the Caulfield Cup and the Melbourne Cup.

Her new dream is to train a winning horse and ride it to victory herself. She says that she will be retiring from professional racing in 2018 and before she leaves she want to be the first trainer-jockey to win the Melbourne Cup.

Payne is planning to leave for Europe in the middle of 2017 and find her special animal. Payne is now 31 years old but believes 2016 was one of her best years in racing. She described the year as a crazy one that had both great highs and lows.

The reason for her decision to retire from racing came after a terrible fall during a race in May. She had to undergo extensive abdominal surgery. The injury resulted in her having very limited time in professional racing.

Payne says that she knows the dangers of the sport are very real, but she wants to pursue doing what she loves and has set this final goal for herself before she leaves the sport for good.

She was one of the first people to pick up the newly created Jockey-trainer licences that have first been introduced in August of 2016 by Racing Victoria. She has also received offers from many breeders and enthusiast to purchase international horses.

Payne says that while she prefers German and French horses due to superior breeding, she is just interested in finding the right horse for her and not a specific breed. It is certainly a shame to lose such a bright talent from the sport, but it seems like Payne certainly plans to go out with a bang.