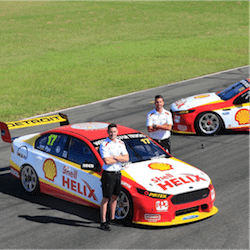 Australia’s oldest Supercars racing team, DJR Penske, have made a surprise announcement that they will not be issuing team orders to their two drivers, Fabian Coulthard and Scott McLaughlin in their Supercars Championship race at Townsville.

These two stars are currently ranked No 1 and No 2 in the overall standings with just 10 points separating the two teammates. They will be heading to the Townsville 400 this weekend to apparently keep their domination of the field going.

Team orders are often used to earn the maximum amount of points for race team by issuing instructions for drivers to take certain actions to ensure another team driver can take pole position or advance in the field but Penske want to keep the race fair and competitive.

Scott McLaughlin may have started slow this season but he has certainly placed allot of pressure on the veteran to perform at his best at all times. Coulthard recently re-signed with Team DJR Penske stating that they have the best engineers, pit crews and management in the business and he knows this year he will be close enough to grab the Supercars Championship.

He also recently announced that he is expecting twins with his long time partner so it certainly seems that things will be coming up roses for Coulthard this year.

Domination Not Yet A Certainty

DJR Penske certainly seem to be creating a racing dynasty here with veteran Coulthard leading the new young upstart racer McLaughlin. Team boss Ryan Story has said that the two drivers are naturally competitive and keep challenging one another at every race.

They do not let any rivalries or competition get in the way of doing what is best for the team. This confidence in the two drivers’ commitment to the team is possibly what has lead to the announcement that no direct team orders will be issued.

They will however be facing enough challenge already from the ever hungry team, Red Bull Racing Australia, who are snapping at Penske’s heels. Jamie Whincup, six times Supercar Champion is the lead driver for the team and he is a mere 16 points behind Coulthard. Story confirmed that team Red Bull is a serious threat to Penske at the moment thanks to their skill and experience.

Penske have a historically good performance at the Townsville 400 but this year their past victories may not be enough to hold the fort against the Red Bull tide. Fans and critics alike though still favour the DJR Penske team. You do not become the oldest Supercar team if you cannot pull the occasional rabbit out of a hat.