Racing action at the National Hall of Fame Race Day 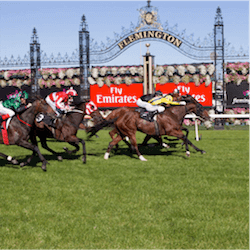 In Australia, the Racing Hall of Fame is the racing industry’s highest accolade. Inductees into the Racing Hall of Fame include the greats from the Australian thoroughbred racing community. On Saturday the 20th of May, Flemington Racecourse will host a race day to acknowledge the honour roll off inductees as well those who have been newly nominated. These include past directors of the VRC who have made significant contributions to the racing industry.

The National Hall of Fame Race Day will offer up an exciting day of racing with nine races scheduled on the race card, highlighted by the 3200m Andrew Ramsden Stakes. One of the highlights of day is the Living Legends experience. Legends of the horse racing industry will be on field for guests to be part of history. This year, Might & Power as well as Efficient will be parading in the Mounting Yard throughout most of the day.

The feature race of the National Hall of Fame Race Day is undoubtably the 3200m Andrew Ramsden Stakes. Last year, the race proved to be better than anyone expected. Apprentice Harry Coffey was in the saddle riding the Darren Weir-trained Glorious Sinndar. With starting odds of $5.50, Glorious Sinndar was slow to start but fought back to win by a short length ahead of The Bandit who was sitting at odds of $9.00. Race favourite De Little Engine rounded off the trifecta at odd of $4.80.

After the race Coffey said that Glorious Sinndar deserved all the credit for the victory. The horse was able hold it together after the runner up gained a half-length on him earlier in the straight. It was in the final 20 meters that Glorious Sinndar went all out and taking the win. Interestingly enough, the 2016 race was won in a quicker time than the 2015 Melbourne Cup, which was run over the same course, track conditions and distance.

This year, punters are hoping for more excitement at the track. The first race of the day starts the nine-race-card action at 11:45 with the 1400m Super Vobis Two-Years-Old Plate. Race two will follow shortly after, being the Super Vobis Three-Years-Old Handicap over 1600 meters. Plenty of action will follow with the Andrew Ramsden Stakes closing off the day’s racing starting at 4:45pm.