Randwick: Queen of the Turf Stakes 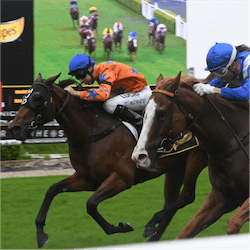 The Queen of the Turf Stakes, currently run as the Coolmore Legacy Stakes, has been a feature of Australian racing since 1972. Run over 1600m at Sydney’s Royal Randwick Racecourse for a purse of $1-million, it is a weight-for-age handicap restricted to fillies and mares three years old and older.

New Zealand punters will want to take a punt on the Queen of the Turf field this Saturday, when it will be the penultimate race on the card at Randwick’s Queen Elizabeth Stakes Day. Saturday is also a Sydney Autumn Carnival event at Randwick, and Day Two of the course’s ‘The Championships.’

The $4-million Queen Elizabeth Stakes and the Queen of the Turf Stakes are two of Randwick’s four Group 1 races scheduled for Saturday, and on the silver anniversary of Her Majesty conferring official ‘royal’ status on Randwick, the former will be the focus of the day’s social celebrations. The other two Group 1 races are the $2-million Sydney Cup over 2400m, and the 1600m Australian Oaks for 3-year-old fillies, with a $1-million purse.

Of the day’s four G1 races, the Queen of the Turf boasts the largest field, with 18 fillies and mares accepted. Betting fans in New Zealand will have to study the form carefully to pick a winner, although 4-year-old Silent sedition is the clear favourite at $4.80.

Veteran Australian jockey Damien Oliver is down to ride in every race on Saturday, including all four G1 handicaps. He has currently achieved 107 Group 1 wins, putting him one victory behind the all-time record of late Australian racing legend Roy Higgins.

Oliver is set to ride New Zealand filly Devise in the Australian Oaks, Irish entire The United States in the Queen Elizabeth Stakes, Irish gelding Assign in the Sydney Cup, and Australian filly Oregon’s Day in the Queen of the Turf Stakes. By Saturday night, he may well have equalled or beaten Higgins’ record.