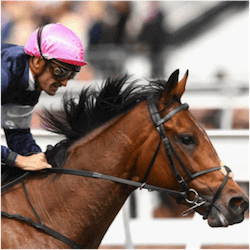 The world’s richest two-miler lived up to its nation-stopping nickname when British four-year-old horse Rekindling won this week’s Melbourne Cup. It was an emotional race for 24-year-old Irish trainer Joseph O’Brien, who has been in the game less than a year, following his retirement as a jockey.

Until the final stages of the race, it looked like Johannes Vermeer had it in the bag. The Irish five-year-old, an entire like Rekindling, is trained by O’Brien’s vastly more experienced father, Aidan, who was following the race back in Ireland.

O’Brien Senior has never trained a Melbourne Cup winner, so the baton was well and truly passed when jockey Corey Brown steered Rekindling to the front in the final 50 metres to win by less than half a length, making O’Brien Junior the youngest Cup-winning trainer in the race’s 157-year history.

Johannes Vermeer stayed in it for second, with French eight-year-old Max Dynamite a further two-and-a-half lengths behind in third. The gelding is in veteran trainer Willie Mullins’ stable, which means that the all the Melbourne Cup top three were Irish-trained.

Priced at $9.00 at the jump-off, Rekindling made plenty of punters very happy, and left the race favourites looking a bit silly. Marmelo, Almandin and Humidor were all fancied, but none of them came close to placing in the 23-horse race: Marmelo finished 9th, Almandin 12th and Humidor 19th.

One lucky punter, identified only as Dominic from Melbourne’s Mill Park, won a bookies’ draw earlier in the day for a free promotional punt on the Cup, and picked Rekindling. He walked away with a cool million dollars.

The morning after the Cup, Rekindling was reported to be in excellent health after a check-up, so he appears unscathed by his exertions at Flemington. O’Brien Junior is now considering him for the European season next year, and he may be entered for the Gold Cup at Royal Ascot during the English summer.

Another British import, Regal Monarch, did not fare as well on Melbourne Cup Day. The five-year-old gelding fell heavily in the fourth race, sustaining injuries that sadly required him to be put down.