Robert Sangster Stakes on 6 May 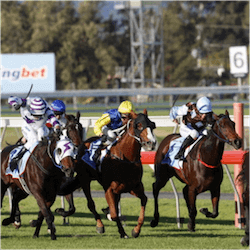 Morphettville’s Robert Sangster Stakes on 6 May

New Zealand horseracing fans have plenty of Australian online betting options in the Autumn Carnival at Adelaide’s Morphettville Racecourse. The Robert Sangster Stakes, for fillies and mares three years old and older, is a 1200m sprint scheduled for 6 May.

The race dates back to 1983, when it was inaugurated as the Swettenham Stud Stakes. After the death of Swettenham principal and successful breeder Robert Sangster in 2004, the race was renamed in his honour in 2005. Since 2009, it has been known by a variety of sponsor names, and it is currently titled the Ubet Classic.

The Group 1 weight-for-age Robert Sangster sees its purse raised to $1-million this year. Robert Sangster Stakes Day will also see the running of the Group 3 Jansz National Stakes over 1200m and the 2000m Group 1 Australasian Oaks, so it will be a popular meeting in the 2017 Adelaide Festival of Racing.

I Am Gypsy, the 5-year-old trained by Gordon Richards that finished third after Illustrious Lad in the RN Irwin, is being offered at $101 for the Robert Sangster, for those who want to take a flyer on an outsider.

Hong Kong-based Brazilian jockey Joao Moreiro, acknowledged as one of world racing’s superstars, has been booked to ride 5-year-old Sheidel, the runner up to Precious Gem in last year’s Robert Sangster.

‘Magic Man’ Moreiro has ridden Sheidel twice before: at Flemington’s Group 3 Sensis Stakes in October 2016, and most recently in the Group 1 Oakleigh Plate at Caulfield in February. Both races are run over 1100m, and Sheidel and Moreiro were victorious on both occasions. She is being offered at $8.00.

The Goodwood is South Australia’s premier sprint over 1200m, and it is scheduled at Morphettville on 20 May. The Robert Sangster could also prove a useful guide to the form of those fillies and mares that go on to run the Goodwood.