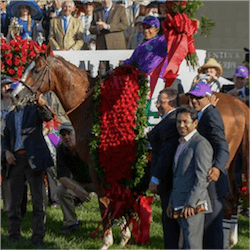 Most nations have races that become national icons; England’s Grand National, for example. Of course, whether New Zealand’s national racing icon is the Auckland Cup or the Wellington Cup is a matter of fierce debate, but happily, no such difficulty exists with the United States.

The USA’s most iconic race is undoubtedly the Kentucky Derby: one-and-a-quarter miles of racing history run every year at Louisville’s famous Churchill Downs track since 1875. Not only does the Derby, with a purse of $1 million, attract the biggest crowd in US racing, but it is also the American race most watched on national and international TV.

Kentucky Derby Day, scheduled this year for May 06, is the final Saturday of the Kentucky Derby Festival fortnight. The 2000m Kentucky Derby, a Grade 1 race for 3-year-olds at set weights of 55kg for fillies and 57kg for geldings, is also the first leg of the American Triple Crown.

The other two legs of the Triple Crown are the 1900m Preakness Stakes in Baltimore, Maryland, on May 20, and the 2400m Belmont Stakes in Elmont, New York, on June 10.

New Zealand punters have to wait until May to know the final field for the 2017 race, but the official website has a handy feature called the Road to the Kentucky Derby. This keeps betting fans updated on nominated horses, along with their points and rankings in qualifying races.

Fans should also pay attention to several US races preceding the Kentucky Derby, for a clearer indication of contenders’ current form. The Florida Derby on April 01 at Gulfstream Park is one, as is the Santa Anita Derby on April 08 in California.

Chances to Check Out the Favourites

The Wood Memorial Stakes on April 08 in New York might also be worth a punt, if the colt El Ameer is running. He is currently second favourite for the Kentucky Derby.

The favourite at this point, Classic Empire, is another colt. His stable seems confident that the foot abcess that troubled him when he ran third in the Holy Bull Stakes at Gulfstream on February 04 has been cleared up. Punters should check if he’s in the field on March 04 for Gulfstream’s Fountain of Youth Stakes, to rate his chances on May 06.