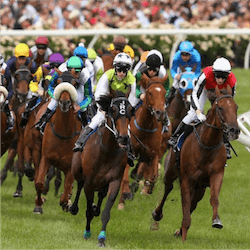 The Melbourne Spring Carnival will feature the Memsie Stakes, the HD McNeil Stakes, the Cockram Stakes and the Heath 1100. Of these events the Memsie is one of the most prestigious events of the calendar.

Generally it will be packed with Group 1 competitors who are making their return to racing in Spring so the trainers who come prepared with their horses are usually those who succeed.

Trainer Darren Weir has publicly stated that he is confident that defending Memsie Stakes champion, Black Heart Bart will be fit enough for the $1 million Memsie Stakes. The race is to be held on the 2nd of September so the team still have time for recovery.

This comment comes after the stewards’ post race feedback stated that Black Heart Bart had pulled up with a lame hind leg.

Queensland Horse of the Year contender Yankee Rose will be making her return at the Memsie Stakes. Trainer David Vandyke has kept Rose in the stables for the past 23 weeks to recover and train after bone chips were found in her knee after the VRC Oaks last year. Vandyke is confident in Yankee Rose who always seems to perform greater at her first start. You can get your bets in at Crownbet if you want to wager on this, and other exciting races.

Fans are keeping an eye out for the return of Merchant Navy at the HD McNeil stakes this Saturday.

Merchant Navy has so far won every start in his career, making trainer Cairon Maher confident in Merchant Navy’s chance to deliver.

After his return at the McNeil Stakes, Merchant Navy is set to head to the Caulfield Guineas.

Trainer Nick Rule will be running Written Era at the Cockram Stakes in Caulfield. The mare had a pretty poor 7th place finish at her last race in Caulfield. According to her jockey she started late and is still getting used to the 11000m races as she is more accustomed to 1200m events.

Both her trainer and her jockey have faith in her however after winning 5 of her 13 career races so far.

Robert Smerdon’s Oak Door will be running in the Group 3 Heath 11000 Stakes. The trainer has full confidence in his horse that has had a reliable career so far.

He has taken 4 wins of his 14 career races, with 2 second place finishes and 2 third place finishes. Smerdon has been saving Oak Door for this race and believes he will have a great start and provide a strong challenge for the field.