St Jean Out of Auckland Cup 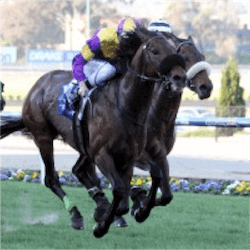 None of New Zealand’s horseracing fans will want to miss a punt on the Auckland Cup on Saturday, 11 March. Some of the top stayers fancied for the iconic two-mile Ellerslie race are under close scrutiny this week, as punters try to glean every last scrap of information on the form.

At the time of writing, many of the horses prominent in the Auckland Cup field were about to jump off in final prep races at Ellerslie’s New Zealand Derby Day. These include the ante-post Auckland Cup favourite Chenille, a 3-year-old mare trained by Tony Pike, currently at $5.50 after winning the Karaka Stayers Cup in January.

Chenille was scheduled to take on 5-year-old gelding Pentathlon in the 220om Nathans Memorial Handicap at Ellerslie on Derby Day. Pentathlon is second favourite for the Auckland Cup, along with Mister Impatience, at $8.00. Five To Midnight and Fanatic are the other Auckland Cup hopefuls most favoured by punters, at $10.00.

At $12.00 in ante-post betting, 6-year-old St Jean was one of five horses in the middle of the betting for the Auckland Cup. However, punters convinced that a not-quite-outsider will take it this year will have to think again, as St Jean’s stable withdrew him after he suffered a swollen tendon.

The entire has won a total of $325,249.00 over his career in Ireland, Australia and New Zealand, taking five wins from 12 starts with one second. His last significant win was on New Year’s Day in the City of Auckland Cup over 2400m. The Logan-Gibbs stable has decided to retire him from racing now, so his future as a stud horse is being planned.

The long-range forecast predicts partly cloudy conditions with showers on Auckland Cup Day, so the race could go to one of the contenders lower down on the betting. With St Jean gone, Jacksstar and Savaria are two other $12.00 chances worth a punt.

If the conditions get really rough, however, 10-year-old gelding El Soldado can’t be ruled out, as he has the strength and stamina for the distance in poor going. He’s the 2016 Auckland Cup champion, coming off an Ellerslie win in the 2400m Avondale Cup last month, and is currently priced at $20.00.