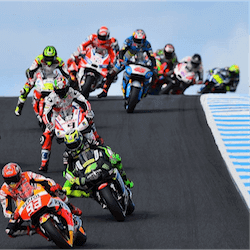 Mention Phillips Island to a a Superbikes fan, and they’ll automatically think of the famed racing circuit where the Superbike World Championships just started. But there’s much more to Victoria’s tourist magnet than that. Here’s a selection of trivia about the island, and its famous racing history:

– The Weather’s Not Very Australian

Phillip Island’s location south of Melbourne, separated from Tasmania by the Bass Strait, gives it a climate much more like northern New Zealand than the rest of Australia; balmy, humid and subtropical rather than bloody hot and dry.

The cute seals that are now part of the wildlife attractions, along with fairy penguins and other bird life, were once the chief reason for the first European visitors. Sealers based in Tasmania, then Van Diemen’s Land, were among the earliest outsiders to have contact with indigenous locals in the late 18th Century. Which also brings up the awkward fact that:

Although now named after a former governor of New South Wales, Phillip Anderson, the original inhabitants were the Bunurong people of the Kulin nation. In the Bunwurrung language, the island was called “Millowl” or “Corriong”.

The bridge that connects Newhaven on Phillip Island to San Remo on the mainland was begun in 1938 and completed in 1940. Since then, it has made the island an easy day trip for tourists from or stopping over in Melbourne. But it’s also caused problems.

– Fourth Time Lucky Re the Racing

The now world-famous Phillip Island Circuit is actually the fourth incarnation of a racetrack on the island. The race that would eventually become the Australian Grand Prix, the 100 Miles Road Race, began there in 1928, on a circuit created on public roads.

In 1956, the first purpose-built private track was opened, but the bridge from the mainland wasn’t strong enough for the hot-tar trucks needed to build a stronger surface, so the cold-tar track surface deteriorated fast and was closed in 1962. It was refurbished and reopened in 1967, but the same problems recurred until it was shut again after 1978.

Finally, after the bridge was strengthened in the mid-eighties, a durable surface could be laid down, and the circuit has been in its present form since 1988 – a perfect venue for Superbike World Championships action.