SuperSprint Kicks Off This Weekend 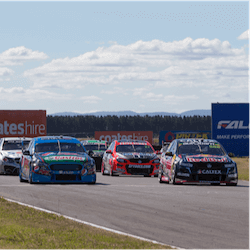 It has been announced that Thomas Randle will be joining the Ipswich SuperSprint this weekend. The 21yera old driver is currently having a great season in Europe racing in the LMP3 Cup as well as in the Eurocup.

Prodrive co-owner, Rusty French will be bringing Randle over to race a Triple 8 Ford Falcon in the V8 Touring Car round. Randle had the opportunity to take the car out for a few laps at Winton and he seems very excited and confident at his potential performance.

While Randle is looking forward to his Australian run, he will be returning to Europe after he is finished. Despite his age, Randle already has built up a glowing resume.

The Challengers This Weekend

Randle will be challenged by Ipswich veteran and defending champ Craig Lowndes from TeamVortex. The driver has had the most successful record at Ipswich, netting 12 wins at the track. Of the 19 races held at this course, he has ended on the podium in 15 of them.

He is currently ranked 7th in the overall championship standings but that was a hard won spot as he has struggled with his qualifying races this season and has repeatedly needed to fight his way to the front of the pack from the back of the grid. The driver seems in good spirits though, heading back to a track that he knows so well.

Scott McLaughlin will also be providing a strong challenge as well in this race with his 12 straight front row qualifiers in his last races. The Shell V Power driver is currently in 4th place in the list of most consecutive front row qualifiers, just behind Dick Johnson with 15, Allan Moffat with 16 and Peter Brock with 22.

Ipswich City Council has announced that they have a new development plan in place for the Queensland Raceway.

The plan, announced at the beginning of this week, has been implemented with the help of the Virgin Australia Supercars Championship and will be a 10 year plan.

Part of the plan is a massive $52 million redevelopment to the Motorsport Park in Ipswich. Since Ipswich has been such a fixture for SuperCars and with the venue hosting 220 000 fans annually, this redevelopment plan looks set to secure the future of racing for Queensland.