Sydney Cup Called A No-Race After Incident On Field 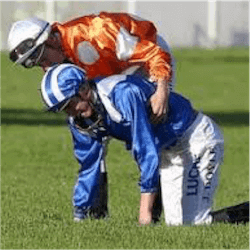 Carnage at the Sydney Cup

The Sydney Cup was always going to be a race filled with drama and excitement. But no one quite expected the sheer drama and controversy that took place on Saturday. Racing stewards made a controversial decision to abandon the race after Almoonqith broke down and two riders were dislodged just past the winning post. Described as “absolute carnage” by a prominent television presenter, the race descended into chaos just after the fall.

After collapsing 100 meters after the winning post, Almoonqith was quickly euthanized by race officials while viewers looked on in dismay. Jockey James Doyle was visibly distressed and limped off the field with the help of fellow jockey Black Shinn who was thrown from his own horse Who Shot Thebarman during the ordeal. The shocking incident took place on the first lap, leaving the wounded horse, the two jockeys and a wondering Who Shot Thebarman as major course obstacles.

Officials made the decision to declare the Sydney Cup a no-race and attempted to alert the rest of the jockeys. However, several of the remaining jockeys did not hear the cancellation announcement and continued to contest the race. The cancellation of the race was completely unprecedented in the 155 years it had been running. This all came on a day when thousands of spectators were in attendance and while millions more watched on free-to-air television.

Confusion on the Field

After the dust had settled, Racing NSW chief steward Marc Van Gestel made an official announcement confirming the cancellation of the race. Van Gestel said that the race was called off due to safety concerns. With Almoonqith motionless on the track and Who Shot Thebarman loping around in confusion, the racing officials had no choice but to abandon the race. Speaking to the press, Van Gestel said that unfortunately some of the remaining riders failed to hear the call to abandon the race.

Coming round the home straight, Polarisation was the first of the remaining horses to complete the race. Jockey Corey Brown was furious when he heard about the cancellation. According to reports he said that where was no sign and that was a farce. He went on to say that the horse broke down a furlong after the winning post. If it was at the 100 meter mark he could understand. Other jockeys echoed browns words in condemning the decision to cancel the race. Others said that they were confused as no clear signal was given. Australian Turf Club officials have yet to announce whether the Sydney Cup would be rescheduled for another date.