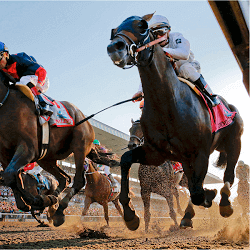 Once the excitement of Christmas dies down, and just in time to kick off their New Year’s Eve celebrations, New Zealand’s horse racing fans get to put a punt on one last race meeting for the year: the TABtouch Perth Cup Day at Ascot Racecourse. Apart from the Group 3 La Trice Classic, the race of the day that everyone will want to have a bet on is the 2016 TABtouch Perth Cup, one of the most prestigious races on the annual calendar at this Grande Dame of Australian racecourses.

At 2,400 metres, the Western Australian race isn’t quite as gruelling as the original two-miler run since 1887, then converted to a metric 3,200m in 1972. But the shorter distance, adopted in 2009, still makes the Perth Cup one of the longest on the Ascot calendar, and it attracts some top competitors with staying power.

If you’re lucky enough to be in Perth on December 31, a great day at the races will end with entertainment from The Presets, timed to finish at 8.30pm, so you can go straight on to your NYE parties. Of course, even from your couch in New Zealand, you can enjoy all the racing action online too.

Four Strong Contenders in the Field

Quite a few winners of the CB Cox Stakes, run at Ascot just two weeks before TABtouch Perth Cup Day, have gone on to win the Perth Cup. A powerful late finish from Perfect Reflection last Saturday to take the CB Cox Stakes by three-quarters of a length has convinced the bookies that this might be another of those years, and the four-year-old is now the $3.00 favourite for the 2016 TABtouch Perth Cup.

But Fathoms of Gold, the outsider that led the CB Cox Stakes from the start and was only hauled in by Perfect Reflection in the last 150 metres, is also on the Perth Cup card, at $17.00. The six-year-old probably doesn’t have the legs for a win over an extra 300m, but a place is a distinct possibility.

Ihtsahymn, trained by Fred Kersley, finished third in the CB Cox Stakes, and is the fourth-favourite for the Perth Cup, at $10.00. But also in with a strong chance are second-favourite Kia Ora Koutou, at $3.20, and third-favourite Tradesman, at $7.50.