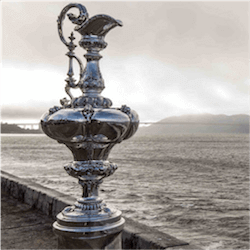 Amid the speculation and rumour spreading, Team New Zealand have finally unveiled their new 50-foot race boat. The sleek new wingsailed catamaran is what the crew hope to use to reclaim the America’s Cup in Bermuda later this year. The America’s Cup Class (ACC) boat has been spotted out on the water with skipper Glenn Ashby putting the crew through their paces.

The arrival of the boat meant that the Emirates New Zealand team had planned to unveil their craft in a big reveal. However, the unveiling was spoiled by some eager observers and the news spread like wildfire. Despite the botched unveiling and radical new design, it was the unconventional pedal grinders that became the talking point at the official launch.

Speaking to the press, Team New Zealand chief executive Grant Dalton said that there had been a lot of focus on the cycling over the past two days. He explained that the addition of the cycling system is part of a bigger picture and he hopes that the opposition are starting to re-evaluate their decisions. Grant went on to explain that most of the boats in San Francisco look as if they came out of the dark ages. Meanwhile the boat from the America’s Cup defender and subsequent challengers are the most advance craft that have ever been launched.

Team New Zealand’s boat was officially christened at their base in Beaumont Street by Tina Symmans who is one of the team’s board directors. The christening took place in the presence of the team members along with their families, the sponsors and a few members of the press. The christening ceremony also included a blessing by Ngati Whatua.

Grinder System the Tip of the Iceberg

At the catamarans unveiling, it was clear that the cycle grinding system was the biggest new development on the boat itself. In total the boat is 15 meters long with a wing of 25 meters. However, Team New Zealand’s design coordinator, Dan Bernasconi was quick to point out that the cycle system was just the tip of the iceberg. For him, the real innovation comes in with the hydraulic systems which control the flight of the boat.

Bernasconi explained that winning the Cup is all about maintaining a stable flight. So in order to improve performance, the boat features incredibly powerful technology in the electronics systems, foil design and electronic systems. The technology, time an effort put into the boat is all to ensure that the team reclaim the coveted Americas Cup trophy.