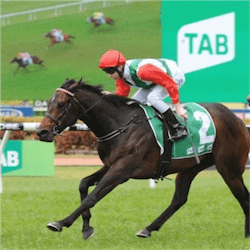 Famed trainer Darren Weir already has four horses entered into the autumn races which include the William Reid Stakes. These horses are the winners of group 1, Flamberge, Black Heart Bart, Palentino and El Divino.

Amongst his ranks, Weir already has a champ with Flamberge who won last year’s William Reid Stakes event. El Divino himself is the half brother of racing legend Winx. With such a pedigree it is no wonder that there are a lot of expectations placed on Weir’s stable.

This will be the first year that Flamberge will be racing with Weir after training with Peter Moody.

Flamberge will be carrying over 60kgs this coming Saturday before the William Reid Stakes.  Flamberge, Hellbent and El Divino are the participants in Saturday’s Kensington Stakes event.

Black Heart Bart And Palentino are up and coming racers for Weir. These two took part in a barrier Trial in Camperdown which greatly pleased Weir.

After he witnessed their performance he confirmed their appearance at the Australian Stakes, also known as the William Reid Stakes.

Flamberge is not the only horse in Weir’s stable that has been trained by other people. El Divino was originally trained by Gai Waterhouse and Adrian Bolt. It will be EL Divino’s first performance for Weir. He has spent some time training El Divino in preparation for the autumn races.

Trainer Peter Gelagotis will be running two horses for the Australia Stakes, Malaguerra and Mourinho. These two racers do not have much faith from fans.

This will be Malaguerra’s first performance after only finishing 5th in the WInterbottom Stakes in November last year.  Mourinho has competed even further back, with his last event run eleven months ago.

Other William Reid entrants include Churchill Dancer and Kay Jay’s Joy from the Lindsey Park stables. Another team of horses to keep an eye on is Chetwood and Peacock, two horses owned by John O’Shea.

So far trainer Mick Price is yet to confirm which of his promising horses, if any, will be taking part in the William Reid Stakes.

So far there has been no news of his standout horses, Flying Artie and Extreme Choice making an appearance at the William Reid Stakes.

According to Price they have physically developed a lot during their spring break and he is confident ion their upcoming performances this year at both local and international events.