A Tribute to Bill Skelton 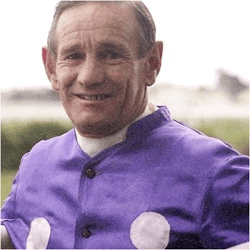 A Tribute to Bill Skelton

The racing community lost one of its legendary members this year, and as the year draws to a close its a fitting time to remember Bill Skelton.

Bill Skelton will forever be known is Bustling Bill, due to his ability to get horses out front and make a run for the finish post. He was 85 when he died, having been active from the 1940’s to the 1980’s. His racing career spanned four decades and included a number of winners as well as a number of countries.

Bustling Bill was born in Campton in New Zealand. He and his siblings would all become jockeys, most of whom would become champions. Bill began riding for work at the tender age of thirteen, riding his first winner at fifteen. Since then he has not looked back with a total of over 2500 horses under his belt, 2179 of which were winners. He still holds the record for most winners in a season, which was the 1968 1969 season in which he rode 124 horses over the line before the rest.

He was known for his slightly bullying approach to riding horses. Back then there were fewer rules, and jockeys could be more aggressive than they are allowed to be today. He got results though, as his record speaks for itself.

Bill Skelton says that the 1969 Cox Plate and Auckland cup winner Daryl’s Joy was the best horse that he ever rode.

Bill As A Trainer

William David Skelton also has success as a trainer, both after he stopped riding and while he still competed. He sometimes rode his own horses to victory as in the case of Lucky Son who won the 1965 Auckland cup. He trained a small string of horses along with his wife, Nella at their home farm. His horses were never big winners, but that wasn’t what it was about for him. His favourite training phrase was: A little bit of kindness goes a long way.

Bill was the iconic New Zealand champion jockey. After he retired and began training, he was still seen around the tracks, chatting to this person and checking that horse. He was internationally followed both in the bookie’s lounges and by racing fans.

In 1994 he suffered a stroke at his home after the usual round of checking the horses at 9 pm. The stroke severely affected both his mobility and speech, leaving him virtually helpless. When he died in 2016 he could only utter a few phrases. His wife, Nella stayed by his side throughout.

Bill Skelton never placed a bet himself, not even when he had retired. Nella had, although she said it was just to hamper the competition. He is honoured with a trophy as the Otaki Maori racecourse called the Punters Challenge. He was so well known to punters throughout his life, that it seemed fitting to have a trophy dedicated to him from grateful punters all over the world.