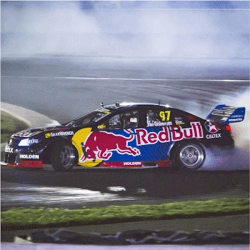 Shane van Gisbergen of New Zealand is proud to have posted the fastest time in practice on Sydney’s streets just in front of the final round of the Supercars Championship.

This star of Red Bull Racing managed to set a time record of 1:02:07, 0.211 seconds faster than the previous record-holder, Tim Slade. Jamie Whincup came in third in the 2nd Red Bull Holden.

Fellow New-Zealander Scott McLaughlin was sixth, a drop in ranking after he topped times in the 1st session that took place earlier that Friday.

Van Gisbergen’s 191-Championship-point lead means that he requires a finish in the top five, or at least a finish within five places of Jamie Whincup, in the upcoming Saturday race in order to secure his first title.

Van Gisbergen has won the Bathurst 12-Hour Title, as well as the European GT Championship already, and it looks almost certain that he will be able to complete a trifecta-win this weekend, short of disaster befalling him.

Small Errors Didn’t Do Too Much Damage

Rather extraordinarily, van Gisbergen actually made an error, locking his tyres in late while completing his flying lap, and this may well have cost him time. He still managed to finish fast enough to secure a top spot however, and clocked in with the fastest time ever to be recorded in practice in the event’s eight-year history.

Qualifying races will commence at 14h15 NZT on Saturday, and his title win will be more than halfway assured should he manage to qualify in front of Jamie Whincup.

Work Ahead for Super Black Racing

Super Black Racing has some work ahead of them after New Zealand native Chris Pither jumped a curb and crashed headlong into a wall, resulting in a red flag. He was unable to continue the race and his team face a busy night in what will more than likely turn out to be their last round ever in Supercars.

Pither reported that he had been struggling with balance, and that he had been doing so over the final few rounds. He stated that he found the drive “nervous and unpredictable… particularly off the bumps”. The lap resulting in the crash however was different, he said, although he was unable to explain why.

The only New Zealand outfit in the Championship has not managed to secure a Racing Entitlements Contract for next season, and, since they are unlikely to manage to find one, this means that we are witnessing the end of their two-year run in this sport.