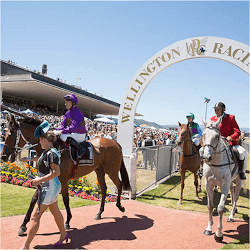 The 2017 Wallaceville Estate Wellington Cup Day, scheduled for January 21, is not only the highlight of the annual Wellington Cup Carnival, it is by far the most eagerly anticipated race day on New Zealand’s racing calendar. Like Ascot Opening Day, it’s that one meeting a year when the glamour of horse racing attracts celebrities and socialites alongside the regular punters, and fashionistas vie fiercely for media attention and the day’s Best Dressed award.

The glitz and glamour of Wallaceville Estate Wellington Cup Day doesn’t mean that the racing is substandard, of course. On the contrary, one of the reasons this meeting at Trentham Racecourse is considered the premier event of the season is that it also features New Zealand’s premier race, for only the finest thoroughbreds in Group 2: the Wallaceville Estate Wellington Cup; restored for 2017 to a gruelling two-mile / 3,200-metre test of speed, strength and stamina.

As the most prestigious race in New Zealand, the Wallaceville Estate Wellington Cup attracts a top-quality field. After winning the race in 2016, snatching victory by a nose from second-favourite Pentathlon, seven-year-old English gelding Mister Impatient spent a year troubled by injury. Happily, he’s fully fit again, so he’s unlikely to start the 2017 race as the outsider he was last year.

But a gelding of a similar age, six-year-old Balham, has shown a marked improvement in speed and stamina since trainers David and Emma Haworth started using a tongue-tie. It’s thought he simply wasn’t breathing properly, and now that he is, he may prove a challenge to the other favourites over the longer distance.

However, punters shouldn’t rule out Jacksstar, a five-year-old gelding trained by Gary Vile, as he is magnificently fit right now. Four-year-old mare Fanatic is also in great form and has been winning convincingly, so she is in with a strong chance too.