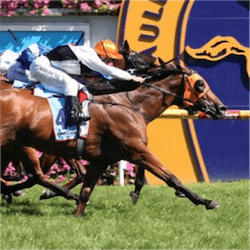 He makes efforts to downplay the hopes pinned on these three horses but with the race listings already making Hellbent a favourite with El Divino nipping at his heels, it seems that he may be trying to lower expectations.

Weir seems to favour the prospects of Hellbent who has great sprinting potential if earlier performances are anything to go by.

Weir went on to say that Hellbent has an amazing turn of foot, but what he really wants to see at the Oakleigh plate is Hellbent hitting the racing line.

Weir has stated that the horses are calm and in good shape and that the Oakleigh plate will be a great start for them.

El Divino is a three year old that has had strong showings since the start of his racing career at the Tulloch Lodge. He the first two starts last Autumn but then had a string of three unplaced races during spring.

Weir has said that there is still a lot of improvement ahead for El Divino, especially since he has a distinguished lineage that sired him.

He is the half brother of the champion mare Winx. In preparation, El Divino has had three months of training at the Warrnambool beach.

Flamberge on the other hand comes off a win in the Oakleigh Plate and William Reid Stakes of last year.

Flamberge is not expected to defend the Oakleigh Plate title this year but it seems this is very much dependant on his performance at the Kensington Stakes.

Competition for Weir will be coming from many angles, notably from Troy Corsten and his two racers Faatinah and stable mate Sheidel. Sheidel is coming off a narrow Group 1 race at the Winterbottom Stakes.

Sheidel will be taking part in the Caulfield Cup before the Oakleigh Plate and her trainer is confident in a strong performance.

Team Snowden will also be snapping at Weir’s heels with Pariah and Defcon both potentially competing in the Oakleigh Plate.

They will be starting off the year at the Blue Diamond Stakes and the Rubiton Stakes respectively before they go through to the Oakleigh Plate.

Fans are already very excited for this year’s Plate event with such a fine pedigree of horses taking part. Weir’s trio is definitely a favourite, especially Hellbent and El Divino who are the ones who need to really prove themselves this year.