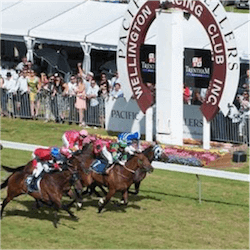 Classic Day at Trentham is traditionally the Super Saturday heralding the opening of the Wellington Cup Carnival, and New Zealand punters enjoyed another great day at the races on January 14. The social highlight of Super Saturday was the Group 1 Randwick Meats Levin Classic, a 1,600m set-weight handicap for 3-year-olds. Colts Hall of Fame and Savile Row jostled for the favourite position in the days leading up to the race.

Cambridge colt Jon Snow led from the start, with Savile Row tucked in behind him. But at the 200-metre mark, Hall of Fame surged past them both, holding off a late challenge from Savile Row to win by a nose, at $2.30. This is the last we’ll see of both horses in the Wellington Cup Carnival, but they will be back at Ellerslie when the New Zealand Derby kicks off Auckland Cup Week.

The big upset of Wellington Cup Carnival Super Saturday occurred in the $70,000 Mills Reef Winery Trentham Stakes. Trainer Howie Matthews’ 7-year-old gelding Sampson was a rank outsider at $22.30, so those with a bet on him were ecstatic to see him win the 2,100m Group 3 race, despite a handicap of 55kg.

However, if Sampson were to race in the Wellington Cup next Saturday, he’d be expected to carry top-weight of 60kg according to Wellington Racing Club assignments. Matthews reckons that is unfair, so he has withdrawn Sampson from nomination. In the latest odds, there are five horses in the Wellington Cup field offered at less than $10: Bloodstream, Alinko Prince, Jacksstar, Fanatic and Clarify.

The third noteworthy race on Super Saturday was the Group 3 Tui – Backing a Winner Since 1889 Anniversary Handicap over 1,600m, also with a purse of $70,000. Thee Auld Floozie, a 5-year-old mare, looked set for victory when she took over from pacemaker La Fille En Jeu. But her stablemate Seize The Moment, a 6-year-old gelding, powered past her on the final turn and held off the mare, despite a spirited challenge in the gallop, to take the win.

Both horses are entered for the Thorndon Mile on Family Day at Trentham, the meeting that closes the Wellington Cup Carnival on January 28. Judging by their form last Saturday, both could be worth a punt.