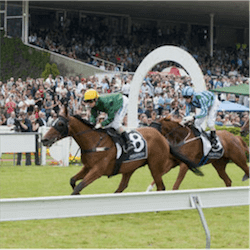 As always, the centrepiece of the autumn Wellington Cup Carnival attracted thousands of New Zealand punters on Saturday. Despite the constant possibility of heavy rain threatening throughout the day, Wallaceville Estate Wellington Cup Day was a racing feast.

In a decision they must be kicking themselves for, breeders Des and Kay Fleming decided not to make the arduous trip from their farm in Taranaki, as their mare Savaria is not good on wet tracks. If the Trentham going had been declared Rough for the Wallaceville Estate Wellington Cup, as seemed likely according to the weather forecast, the 5-year-old would have been scratched.

Ironically, the rain held off just enough for the $250,000 Group 3 Wellington Cup to be declared a Dead 4 track: Savaria’s favourite racing conditions, at her favourite racecourse. Despite steady rain during the race itself, she timed her run over the 3,200 metres perfectly, surging forward from the centre of the field in the final 800m to finish out front.

Race favourite Jacksstar, at $7.60, put on a magnificent gallop from last place to challenge her in the final metres of the race, but the gelding had to be content with second place, paying $2.70. Punters with a bet on Savaria were smiling, at $14.90, as were those who backed 7-year-old Perfect Start at $13.00 for a place: the mare came in third.

For much of the race, it looked as if 6-year-old Railway Stakes winner Start Wondering was running away from the rest to clinch the double, but a powerful late challenge saw 5-year-old outsider Signify charge through for a narrow win at an impressive $46.30. Start Wondering paid out $2.30 on a place bet.

The Telegraph also cast something of a pall over the day, however. Early in the race, 4-year-old First Serve broke her leg in a fall, throwing jockey Samantha Wynne. Sadly, the promising mare, who won three of her last four starts, had to be euthanised. Wynne was devastated by the loss of the horse, as no doubt are Matthew and Michael Pitman, who trained First Serve for the Pearl Fillies Syndicate.