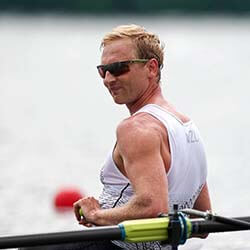 Hamish Bond has announced his retirement from the world of competitive rowing. A three-time gold medallist, Bond is widely regarded as one of New Zealand’s greatest Olympians of all time.

Bond announced his retirement on Thursday.

The 35-year-old teamed up with Eric Murray and won gold medals in the coxless pair event in the 2012 Games in London and the 2016 Olympic Games in Rio de Janeiro.

Murray retired after the 2016 Olympic Games, after which Bond joined the NZ men’s eight. He won his third and final Olympic Gold medal in Tokyo last year. Tokyo marked the first time the country’s men’s eight had won a gold medal since 1972.

During Thursday’s announcement, Bond explained how he had known for a while that the time had arrived for him to retire. He said while it felt a strange announcement to make, he took heart in the fact that he’s bowing out while at the top of his game. He also said while rowing has made him into the person he is today, now feels like the right timing to be focusing on his family and other priorities.

He said he could never in his wildest dreams have imagined the sort of journey that would follow when he first began rowing aged only 13 while a student at Otago Boys’ High School.