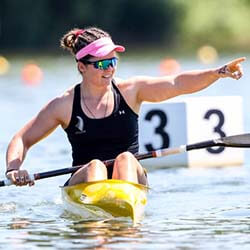 A world class paddler has walked away from her Olympic dream by declaring herself unavailable for the 2021 Tokyo Olympics.

New Zealand paddler and Olympic contender Aimee Fisher has reportedly notified Canoe Racing NZ that she will not be available for selection due to her considering the organisation’s high-performance environment unsafe. Fisher has allegedly spent the past seven months trying to get the national sporting body to take her concerns about the training environment seriously.

According to information received from reliable sources, Canoe Racing NZ imposed a December 7 deadline on the star paddler – before which deadline she would have to have rejoined the national squad in order to become eligible for Olympic selection. Fisher quit Gordon Walker’s centralised programme in May and has been training with a group of “rebel” paddlers ever since. Fisher’s decision became apparent when she recently failed to pitch up to take part in squad trials in Auckland.

Fisher in August 2020 became the sixth high-performance woman’s paddler to quit the national team in a matter of only 18 months. Fisher’s departure did end up prompting supposedly positive change, with Walker shortly after enlisting the services of high performance accelerator coach Christian Penny in an attempt to rebuild culture within the national paddling squad. However, it now appears as if Canoe Racing NZ have largely failed at successfully addressing Fisher’s particular concerns.

Neither High Performance Sport NZ nor Canoe Racing NZ CEO Tom Ashley have commented on the situation as of yet.