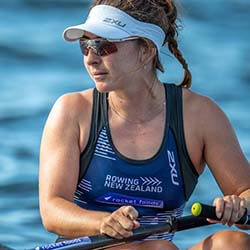 Yet another shock early retirement announcement has come from the world of competitive rowing. Multiple world champion lightweight rower Zoe McBride, 25, has announced that she won’t be competing at the postponed Olympic Games in Tokyo later this year, and that she’s decided to retire instead.

The champion sculler, in partnership with double sculls crew member Jackie Kiddle, was counted among the star favourites to win gold for New Zealand in Tokyo.

While McBride, a two-time lightweight women’s double scull world champion, and a two-time gold medallist in lightweight women’s single scull, has cited the challenges of mental well-being vs. competing at sport at an elite level, as a motivating factor behind her unexpected decision. She said that instead of competing, she hoped to in the near future offer support to younger athletes. McBride added that representing New Zealand had been an enormous honour, and that the decision to retire, albeit not easy, has allowed her to reflect on everything that learnt and everything achieved.

McBride and Kiddle won gold in the women’s lightweight double sculls at the 2017 rowing world championships, and after a disappointing 6th place finish in 2018, were back to claim more gold in 2019.

As for what the future holds for the young rower, McBride has confirmed that she will pursue a career in marketing, and with a specialised focus on women’s health.

McBride and Kiddle were earlier this year named as New Zealand’s lightweight double women’s sculls crew set to represent the country in Tokyo.