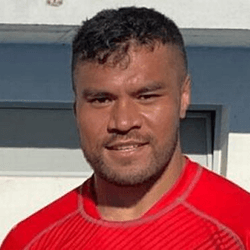 Tragic news confirmed on Wednesday is that New Zealand lock Kawa Leauma has died of the head injuries sustained during an accident in Amsterdam in the Netherlands. The Spanish Rugby Federation, who paid tribute to the 32-year-old following his death, described the cause to have been a “freak accident”.

According to Spanish media reports, Leauma fell eight metres from a multi-story building in Amsterdam.

The Spanish Rugby Federation said on Wednesday though his condition had shown improvement on Sunday following emergency surgery, it had deteriorated severely only a day later.

In its tribute to the star player, the federation said World Rugby and Spanish Rugby are in mourning. The federation said it wished to thank Leauma for his commitment to and love for the game and for his club, AMPO Ordizia. The Kiwi played for the club in the country’s Basque Country, and had travelled to the Netherlands with the club for the Rugby Europe Championship.

According to the federation, the accident happened mere hours after Spain triumphed 52-7 over the Netherlands. The match also acted as a qualifier event for the 2023 Rugby World Cup in France. While Leauma had travelled to the Netherlands to play, he was scratched last-minute from the playing roster because of doubts over his eligibility to play for Spain.

The Kiwi had been hoping on eligibility after three years of residency in Spain. The Spanish Rugby Federation said the New Zealander’s memory would be honoured by Spain’s attempt to qualify for the World Cup for the first time since 1999.