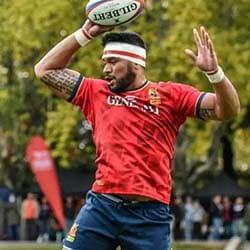 New Zealand rugby player Kawa Leauma is reportedly in a critical condition in hospital after falling eight metres. Leauma, who is undergoing treatment in a hospital in Amsterdam, is said to have sustained life-threatening injuries to the head.

The incident happened in Amsterdam, where Leauma had been playing as part of Spain’s national team in a Six Nations B match against the Netherlands. The accident reportedly took place only hours after Spain beat their opponents 52-7. The Kiwi was rushed to hospital via ambulance directly after the accident.

According to recent media reports, the New Zealander had been scratched last-minute from Spain’s roster after doubts emerged whether or not he had been eligible to play for Spain.

Leauma currently plays for Ordizia. The club posted early on Tuesday how the latest report regarding the Kiwi’s progress “isn’t positive”, and that he may be operated on again throughout the course of the day.

It’s currently not clear precisely how the accident occurred. Neither Ordizia nor the Spanish Rugby Federation have revealed any details other than the fact that he fell eight metres far from a building.

The Spanish Rugby Federation has requested that any news regarding Leauma be handled in a calm and discreet manner. The federation said this request was out of respect for the player’s family. Leauma’s wife is expected to arrive in Amsterdam shortly.

Leauma previously starred in Samoa’s Under 20’s side, as well a stint playing sevens rugby for Auckland.