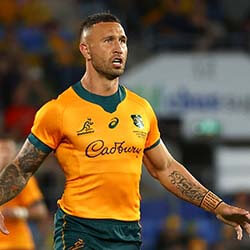 Wallabies star Quade Cooper told the media this week that he will be taking another citizenship test– a test that will hopefully allow him to finally call Australia his home.

Born in New Zealand, the 33-year-old has played 75 Tests for Australia. Cooper has been outspoken about his unhappiness about four previous failed citizenship applications. Those rejections had been because of the many difficulties faced as an international sportsman trying to meet the requirements of citizenship.

Cooper however now has a new shot at becoming a citizen – this after the Australian government recently changed its eligibility rules so as to provide for individuals who qualify under the provision of “distinguished applicants”.

Cooper’s test on Friday will be taken in Japan, where he is currently a member of the Hanazono Kintentsu Liners.

In a tweet on Thursday, Cooper thanked his fans and everybody else who had supported him during his journey. He said he’s forever grateful to finally have a real chance of calling Australia home.

The change that put Cooper back in the running for citizenship came in September when immigration minister Alex Hawke announced that there would be more flexibility for qualifying applications such as professional athletes, artists, scientists, and top businesspeople contributing to the country’s economy.

Hawke said exceptional people should not be punished because of the demands of precisely those things that make them exceptional.

Cooper qualifies to play for the Wallabies through residency. Born in Auckland, he moved to Australia with his family at the age of 13.