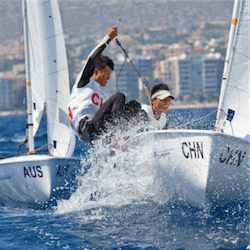 While political dogmas and glorious leaders roar and stamp around the world stage like tyrannosaurs that haven’t noticed the incoming comet of global connectivity and shared ideas, ordinary men and women around the world are looking the practical possibilities of globalisation square in the eye and getting on with building direct bridges of interdependence and exchange between multiple cultures.

For many in the West, this means re-evaluating their attitude towards the most powerful emerging economy on the planet: China.

Which is not to says concerns about human rights, participatory democracy and environmental responsibility need to be ignored, but rather that polite engagement, mutual understanding, and persuasion are likely to achieve more than threats, economic attacks or an imperialist ‘world police’ attitude ever could.

With this in mind, the 2017 Youth Sailing World Championships in Sanya, on China’s largest island of Hainan, could provide an eye-opener for many. Lying south of the mainland in tropical waters, Hainan is already one of China’s top international tourist destinations, so the championships from December 9-16 will display the fruits of the ancient civilisation’s new openness to sailing fans all over the world.

A Quick Look at ‘China’s Florida’

Hainan is an island in the South China Sea situated well within the tropical zone, a smidgen north of 19 degrees above the equator. It’s the largest island under direct control of the PRC government in Beijing. Taiwan is larger, but despite Beijing’s claim of sovereignty, it has stubbornly maintained its independence since 1949.

Hainan is also China’s largest special economic zone; one of the regions in which former premier Deng Xiaoping relaxed the strict rules of the communist state in the 1980s to begin the ‘opening-up’ of China that continues today. The growth and development this has encouraged has turned the island into a tourism hotspot, with plenty for sailing fans attending the Junior World Championships to discover.

The climate also makes Hainan attractive to local tourists, especially those seeking to escape the harsh northern winters. Just as in Florida in the US, many Chinese retirees have resettled there from colder climes to enjoy their golden years in the sun. The combination of retirement immigrants and fun-seeking tourists has earned the island the apt nickname of ‘China’s Florida’.