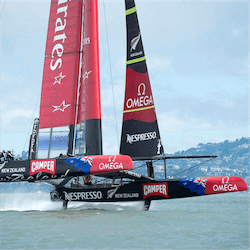 New Zealand sailing enthusiasts have to wait until 26 May for the America’s Cup action to start in Bermuda, with the qualifying regattas of the Louis Vuitton Cup. Nevertheless, Emirates Team New Zealand’s boat, after finishing its preparatory sailing programme in the Hauraki Gulf out of Auckland, is already being disassembled and packed for its flight to the North Atlantic archipelago in little over a week.

Once the 50ft catamaran is reassembled in Bermuda, Team New Zealand will fly out for a final month of sailing trials and fine-tuning, before the start of the 2017 Louis Vuitton Cup. Online betting fans will be as interested in these final tests as defending America’s Cup champions Oracle Team USA are. In fact, there were reports that Oracle spies dogged all 21 days of testing in March.

Plenty of Racing in Qualifiers

Once those 60 races are completed, the top four teams advance to the semi-finals from 6 to 8 June, each of which is a best-of-nine challenge. The best-of-nine finals follow from 10 to 12 June, with the winner through to face Oracle Team USA in the best-of-13 America’s Cup from 17 to 27 June.

New Zealand, Aotearoa up to Challenge

New Zealand, Aotearoa, as Team New Zealand’s boat has been christened, impressed skipper Glenn Ashby in her recent sailing programme. Blessed with ‘Bermuda-like’ conditions for all three weeks, sailors, shore team and designers got to collaborate on getting the best out of both the boat and her crew.

The key variable in the Louis Vuitton and America’s Cups will be the control system, which is what makes the month of fine-tuning in Bermuda so vital. With Team New Zealand the team with the most sailing practice under race-like conditions in the past few months, they are likely to be strong contenders for the title this year.