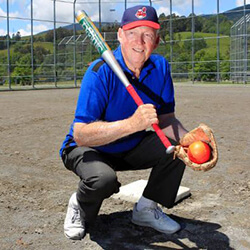 Tributes from across New Zealand have been flowing for iconic softball coach Ed Dolejs, who died in Nelson at the age of 90. Dolejs had led the New Zealand women’s softball team to their only world championship gold medal in 1982. They also earned a silver medal as well as two bronzes at World Series level, and won an additional five international tournaments between 1977 and 1990 where Dolejs was in the third base coach’s box. His success with female teams followed on from his training of the New Zealand men’s team, which went on to share a gold medal with Canada and the United States at the 1976 world championships.

Former New Zealand player and ex women’s coach Colin Ward worked as a long-time assistant for the famous coach, and believes that Dolejs was the best coach New Zealand softball ever had. Dolejs had been inducted into the New Zealand and International Softball Federation halls of fame in 1993, where he earned the highest ISF award for his service to the sport. Cheryl Kemp, a 1982 gold medallist and one of the greatest pitchers in the world stated that the coach’s understanding of the game and its people was without match, and although he will be missed, he has left a legendary legacy behind him.

Dolejs, who had been born in Ohio in 1929, moved to New Zealand with his family in 1965. They settled in Nelson, where he began work on his softball career.