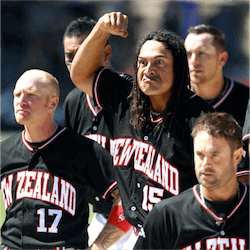 For the next week, the AWF Stadium at Rosedale Park in New Zealand will play host to five of the top softball teams from around the world. The WBSC-sanctioned 2017 Softball Challenge Cup will act as a precursor to the softball world championship which is scheduled to be held in Canada later this year. Getting their campaign underway, the number 1 ranked New Zealand side, the Black Sox got off to a good start after beating Japan in their opening game.

While they are currently ranked number 1 in the world, the Black Sox had to stave off a fiery late comeback from the Japanese side after going up 5-0 in the first five innings. In the first game of the six-nation Cup Tournament, Japan had the edge over Argentina and manged to pull off an impressive win of 6-4 to and settle their nerves. However, their win over Argentina did not seem to boost their performance Against New Zealand.

Struggling to find their feet against a rampant Black Sox side, the Japanese found themselves 5-0 down after just five innings. After a bit of a regroup, Japan managed to get themselves sorted and level the scores fairly quickly. But the New Zealanders, bolstered by the home crowed were up to the challenge. The Kiwis stepped up to the challenge with Ben Enoka creating a perfect triple, bringing home Jerome Haretuku while Joel Evans managed to bat in Enoka to give New Zealand some breathing room.

In the latter stages of the game, Cole Evans who cleared the fence in the second innings, hit a sneaky single to bring home Tom Enoka. On the plate, Josh Harbrow batted in Wayne Laulu giving the Black Sox a decent four-run lead. Completing the run for the New Zealand side was Alfons Oveinikovas who managed to slash off a single to bring in Evans and give New Zealand a clear five-run victory.

Speaking to the press, Black Sox coach Mark Sorenson said he was happy with the performance of the tea and the way they worked themselves back into the match after Japan had levelled the scores. He was particularly happy that the New Zealand side had an answer for the Japanese when under pressure. Meanwhile Australia got their campaign off to a good start thumping 12th ranked Samoa with 12 runs to 3. In the second match of the day, Argentina managed to bounce back from their earlier loss to defeat the Czech Republic 4-0.