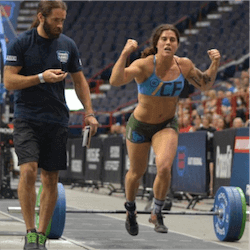 The CrossFit Games Results For 2017

American Mat Fraser and Australian Tia-Clair Toomey finished in the top podium position this weekend at the conclusion of the Reebok CrossFit Games.

The two champs have previously claimed CrossFit titles and this year they were definitely hard won as the competitors really upped their game.

This is the second title for Mat Fraser who was defending his 2016 win. It is also the fourth time that he has made it into the top 3 of the games. Fraser battled for 2 years, ending in second place each time before he finally won the 2016 games and hasn’t looked back since. In the process Fraser also set the margin of error for point’s record, further compounding his domination in the last two years.

First Time No1 For Toomey

Not only is this Tia-Clair Toomey’s first win at the CrossFit games, it is also the first time an individual win has been claimed by an Australian. She can now officially be termed the fittest woman in the world after this win and her great runner up finish in weightlifting at the 2016 Olympic Games.

This is Toomey’s third podium appearance at the games after finishing 2nd twice in previous games.  It was very narrowly fellow Australian, Kara Webb who took home the gold. Webb kept the competition neck and neck against Toomey, despite this being Webb’s first CrossFit games. Even though Toomey finished 8th in the Fibonacci Final, the last fitness event of the tournament, it still earned her a 2 point advantage over Webb and the claim to the No1 spot on the podium.

Annie Thorisdottir who claimed the 2011 and 2012 CrossFit Games finished in third place the weekend. She has made 5 overall podium appearances in her career. Former two time champ Katrin Davidsdottir, also from Iceland finished in 5th place.