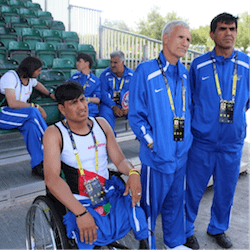 The CEO of the 2017 Toronto Invictus Games flew to Kabul recently to meet with potential Afghani competitors in the upcoming Invictus Games. Established by Prince Harry, the Invictus Games is an international sporting competition for wounded, injured and ill servicemen and woman as well as wounded veterans. Using the rehabilitative power of sport, the competition aims to inspire hope and rehabilitation.

Michael Burns, the CEO of the Invictus Games said that he was impressed with his visit to Kabul. According to Burns, the preparation of the Afghani team was excellent and he felt that the wounded warriors are going to be a force to be reckoned with. 2017 will be the third edition of the Invictus Games which is scheduled to be held in Toronto from the 23rd to the 30th of September. Burns hopes to build on the success of the first two games that were held in London in 2014 and Orlando in 2016.

During his visit to Kabul, Burns met with the president of Afghanistan, Ashraf Ghani as well as the commander of the NATO Resolute Support Mission, General John Nicholson to witness the progress of the Afghani team as they ready themselves for the upcoming games. At this stage, Afghanistan expect enter a team of at least 7 military service members. They will be supported by their friends and family throughout the journey.

Strength and Hope Through Sport

Speaking about his trip, Burns said that Afghanistan is a country that is forever linked with Canadian military and its history. It was a powerful experience for Burns, learning about the soldiers who were wounded in battle. He was reminded of the strength of the Afghani people and the sacrifices they made to make their country safer. He felt that there was a real need for programs like the Invictus Games that support the recovery of injured service men and woman.

The upcoming Canadian Invictus Games will feature a total of 550 competitors from 17 nations. The inured or ill service members will participate in 12 adaptive sports including: Athletics, archery, powerlifting, golf, swimming, indoor rowing, sitting volleyball, wheelchair tennis, wheelchair rugby, wheelchair basketball, driving challenge and cycling. The 2017 games will be funded by the Government of Canada, the City of Toronto, Jaguar, Land Rover and other sponsors.