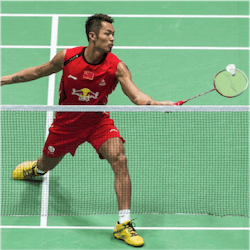 The 2017 Badminton World Championships are to be held in Glasgow at the Emirates Arena between the 21st and 27th of August. The Badminton World Federation has released their seeded player list with updated player rankings.

English star players, Chris Adcock and Abby Adcock have been seeded in the mixed doubles in 5th place. The pair will be looking to capitalize on their success so far with a great showing at the World Championships. They are coming off a fresh win at the European Championships in Kolding where they managed to take home the gold for doubles. They will be looking to claim more medals after their fantastic commonwealth performance

The duo will be joined by the equally talented Marcus Elis and Chris Langridge. The duos have a European and Olympic medal between them but this year’s Badminton World Championships will be their first opportunity to claim a BWF medal.

They will be joined by English no1 Rajiv Ouseph who also holds the European Champion title. The un-seeded Ben Lane and Jessica Pugh who are making their BWF debits after making it to the US Open finals in July will also join them.

Widely considered as the best Badminton player Glasgow has ever produced, Kirsty Gilmour has been selected as the Badminton World Championship Ambassador for 2017.

She is a silver medallist and current world no 16. Gilmour has been selected s the ambassador in part because she is from Glasgow where the event is being held and in part due to her positive e attitude and leadership skills that she shows during all her sporting events.

Li Junhui and Lui Yuchen are the current world no1 seeds for the Men’s doubles. Their team mates Zheng Siwei and Chen Qingchen are the no1 seeds in the mixed doubles events.

From Japan Misaki Matsumoto and Ayaka Takahashi head up the Women’s doubles top seeds. Son Wan Ho and Lee Cong Wei will be the two top male singles competitors as they sit at the top of the current rankings.