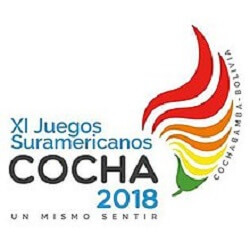 The Bolivian Athletics Federation, also known as the SAB, has recently announced that its national team, which is set to take part in the South American Games, will consist of 60 representatives from the country. The team is to be made up of both sexes, with 35 men and 25 women.

The announcement was made after two qualifying tournaments were held in the department of Tarija. Each one of the representatives achieved the minimum marks necessary to be added to the national team, out of a total of 95.5% needed.

The FAB has revealed that the athletes with the minimum marks acquired were Valeria Quispe, Bruno Garamendi, Fernando Copa, Juan Carlos Huiza, and Aldo Gonzales.

Some of the relief runners for the games include Bruno Rojas, Luis Morales, Carlos Aban, Tito Hinojosa Facundo Riera, and Juan Gereca, for the men. The women include, Guadalupe Torrez, Laura Carballo, Danitza Avila, and Leticia Arispe.

It has also been confirmed by FAB that two injured javelinists Melbin Soto, and Ghaddy Hucuver are planned to go through medical assessments over the next few weeks to evaluate the extent of their injuries.

The events for athletics are planned to be held in the beginning of June. They are set to take place at the Estadio Autonomo, Minicipal de Cochabamba-Parque La Torre, which is located in the southern regions of the Bolivian department.

The main South American Games are set to take place a month later, and over 4000 athletes are anticipated to attend.