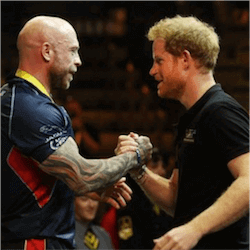 The team captain has been announced representing America in the Invictus Games as Air Force Captain Christy Wise.

Wise is a veteran of the Wounded Warrior games with 11 medals to her name. She has competed in running, cycling, swimming and more.

This is despite her losing her right leg in a tragic boating accident. She went even further and started the One Leg Up On Life non profit organisation that specialises in prosthesis for lost limbs.

No Changes To Determination

She is currently still a full serving C 130 pilot in the military. She learnt how to use her prosthetic leg to effectively do her job and she says she is happier now than she ever was.

First introduced in 2014, the Invictus games is a multi sport event that features wounded soldiers competing in games that range from basketball to rowing. It was started by Prince Harry and this year is already turning out to be one of the biggest events so far.

The Pride Of The Department Of Defence

Many of the American competitors are current gold medal holders, either at previous Invictus games or from the American funded Wounded Warrior events that have a similar theme to the Invictus Games.

Team captain Wise is joined by her co-captain Ivan Sears.

Other gold medallists that will also feature in the American team are Sergeant Elizabeth Marks and Lieutenant Bradley Snyder whop both specialise in swimming.

The games will be held in Toronto this year, which will be the second time the games are held in North America. The organisers have introduced an additional sport this year, Golf.

The event generally features Prince Harry along with other presidents, dignitaries and world-class musical performances from pop and rock acts as well as military bands.

At previous games had the US taking home 145 medals, followed closely by the UK with 128 medals. Other participating nations include Australia, New Zealand, France, Germany, the Netherlands and Italy.

With solid funding from the Canadian Veterans Association and world-class athletes, this year’s Invictus games are sure to be memorable.